welcome to AstroNovice.com
(Scroll Down This Page)

After about a year of trying to figure out how to get my CGE Pro Mount to be detected by PHD2 (auto-guiding software), tonight I cracked the Code and was--for the first time ever-- able to get a green connection confirmatkon that PHD2 was detecting both my Celestron Mount and my Orion Starshoot Auto-guide camera and both using ASCOM drivers.  Keep in mind, I'm doing all this on a MAC and much of my Astro software and drivers are written for Windows.  Here's a screenshot to saver history.  At long last.  Next, I need to attempt to autoguide when the sky is not overcast.  Once I figured out which cable to connect where and which adapter to connect where for this PHD2 thingy, I shot a Video so I can remember it.  Eventually, I plan on uploading a series of helpful Celstron Edge HD 14 How-To Videos.

hi guys, matt here.  i shot the attached lunar photo at 9:55 p.m. from St. Augustine, FL on August 30, 2017 by attaching a Sony A6300 mirrorless camera to a 14-inch diameter Celestron Edge HD 1400 OTA telescope on a CGE Pro mount.  In essence, the telescope is the camera’s telephoto lens.  ISO 640;  Shutter speed 1/60 sec.
On this shot, you can zoom in and make out the faint, tiny Hadley Rille winding almost like a river along the tiny Hadley crater (north of about the top 1/5th of the Moon's Apennine Mountain Range, running east-west with shadows).  The north-west curve of that Rille is where the Apollo 15 Mission landing was.
In the attached photo, you can also see the approximate location of the Apollo 11 landing site in the Sea of Tranquility—just northwest of the bird’s eye in the bottom left of the attached photo.
The deep crater (with a triangular mound in the crater's center) at the left of the mtn range is named after Eratosthenes, Greek Astronomer living in Alexandria, Egypt, who in 200 BC, calculated the Earth's circumference using a stick, the sun's Noon shadow on the Summer Solstice, and Geometry, having never left Egypt.

Orion Nebula taken by Mercer Feb. 5, 2016, 4 shots taken 11:54 p.m. through 12:01 a.m. using Celestron Edge HD 1400 OTA telescope on a CGE Pro mount, with attached Nikon D3200 camera, exposure time ranging from 6.6 to 21.3 seconds.  The Orion Nebula (also known as Messier 42, M42, or NGC 1976) is a diffuse nebula situated in the Milky Way, being south of Orion's Belt in the constellation of Orion. It is one of the brightest nebulae. M42 is located at a distance of 1,344 light years and is the closest region of massive star formation to Earth. The M42 nebula is estimated to be 24 light years across.

Cool Quotes on God's Role with the Stars & Constellations:

"He is the Maker of the Bear and Orion,
the Pleiades and the constellations of the south."  Job 9:9 (NIV)

"The heavens declare the glory of God;
the skies proclaim the work of his hands."  Psalm 19:1 (NIV)

"When I consider your heavens, the work of your fingers,
the moon and the stars, which you have set in place,
what is mankind that you are mindful of them, human beings that you care for them?"  Pslam 8:3-4 (NIV)

Make sure the Settings gear icon in the video player below is set to 'Quality: 2160p 4K' for best quality:

Hi, friends! Matt here. Welcome to my website (launched May 14, 2015) to share my journey into the study of planets, stars, globular clusters, nebulae, and galaxies!  The site is powered by an Apple Mac and will continue to develop as I get more content.  After scrolling down, scroll up top to see this site's different pages and content.

Shot of the blue star Vega the other night 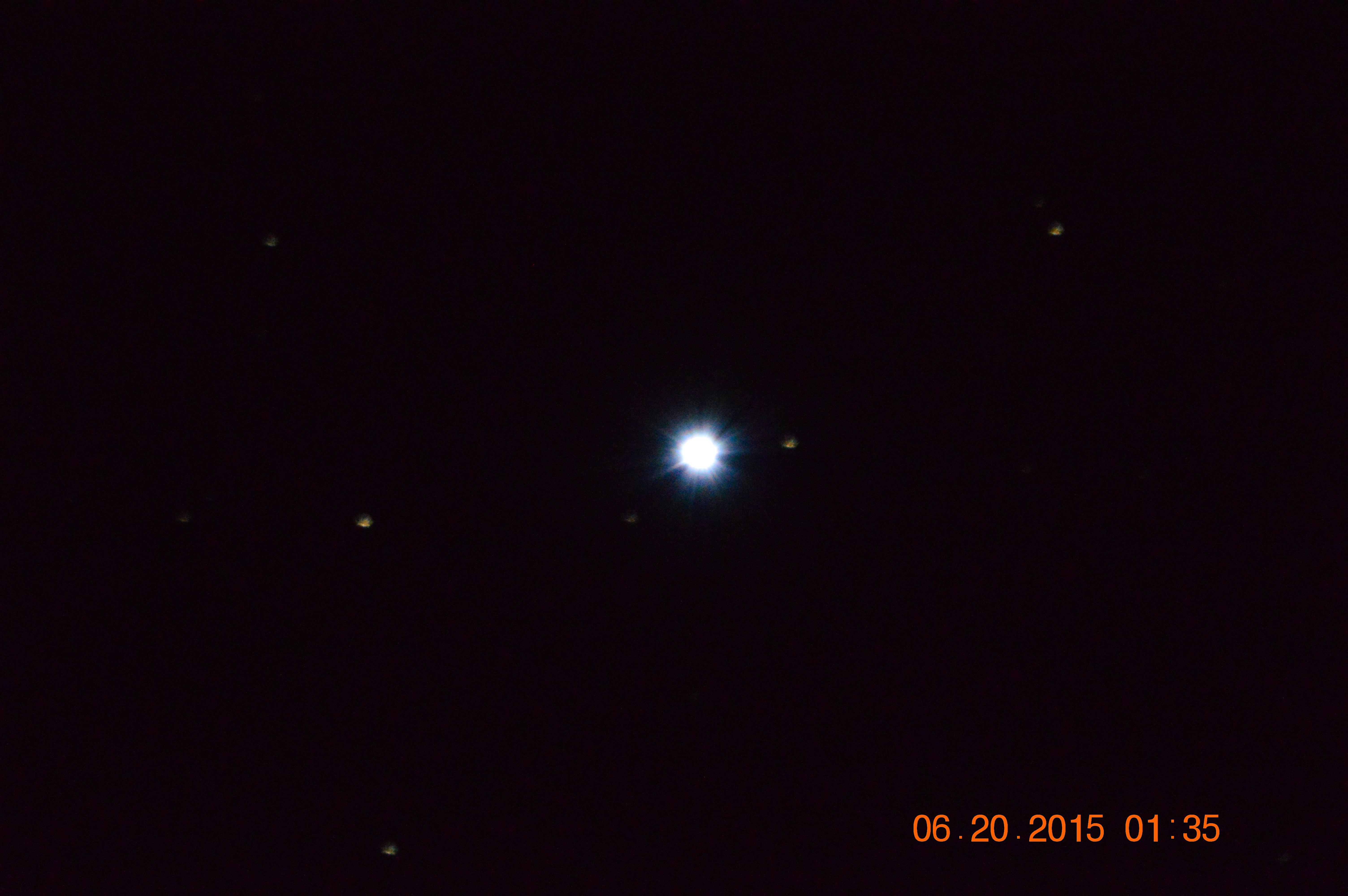 Learning that for the best astrophotos, i need an auto guider to eliminate minor tracking errors that occur during prolonged camera shots. I have one arriving on the 18th. Last night, I installed my JMI Wheely Bar which carries the scope out to the driveway. Very well made and worked great last night. 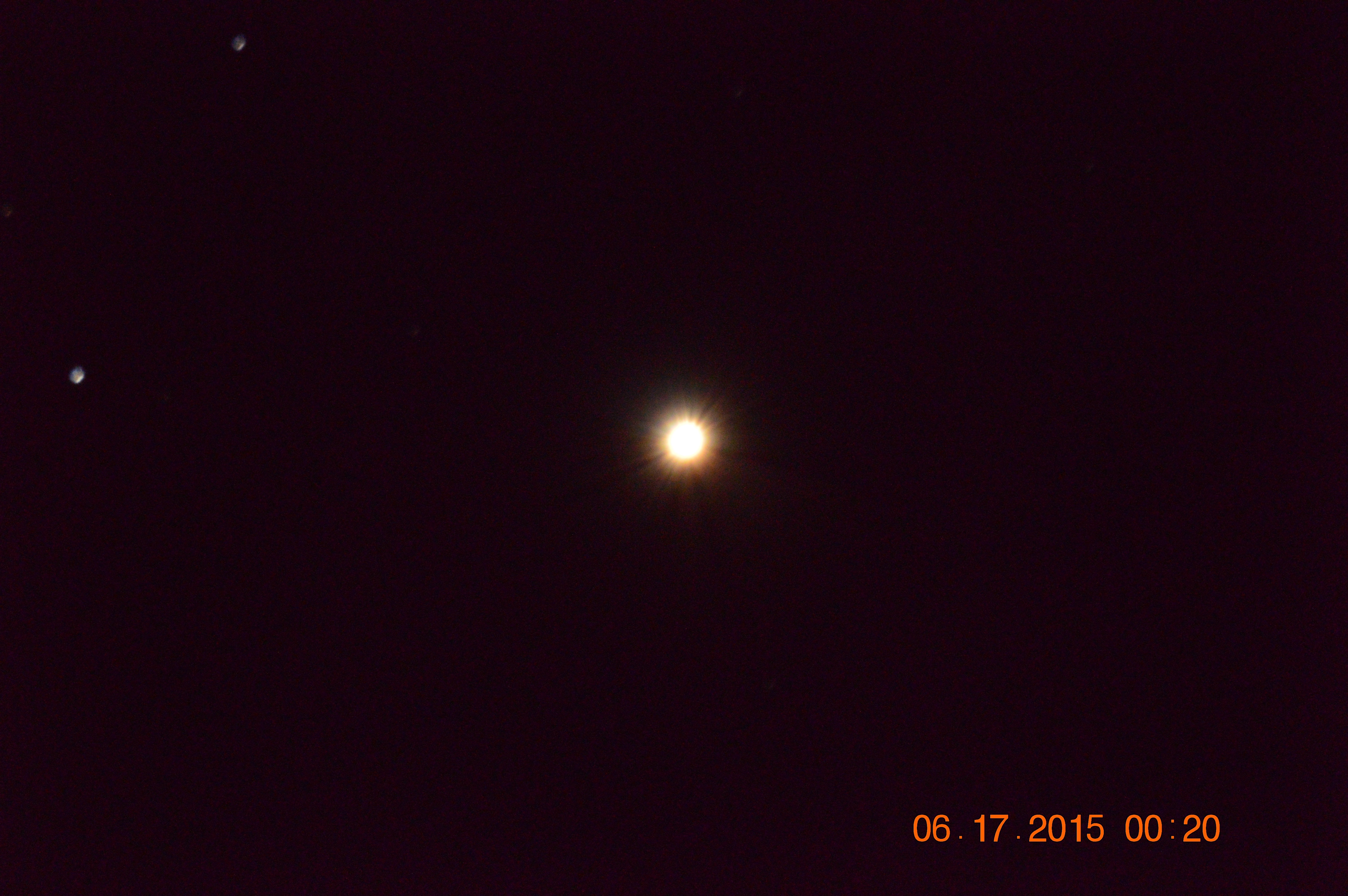 M13 Globular Cluster (in Hercules Constellation), taken 06/14/2015, Nikon D3200 mounted on Celestron EdgeHD 1400 on a CGE Pro Mount (photo taken in 14MB size but reduced to to 5MB fit in this Blog. No photo enhancement and no stacking) 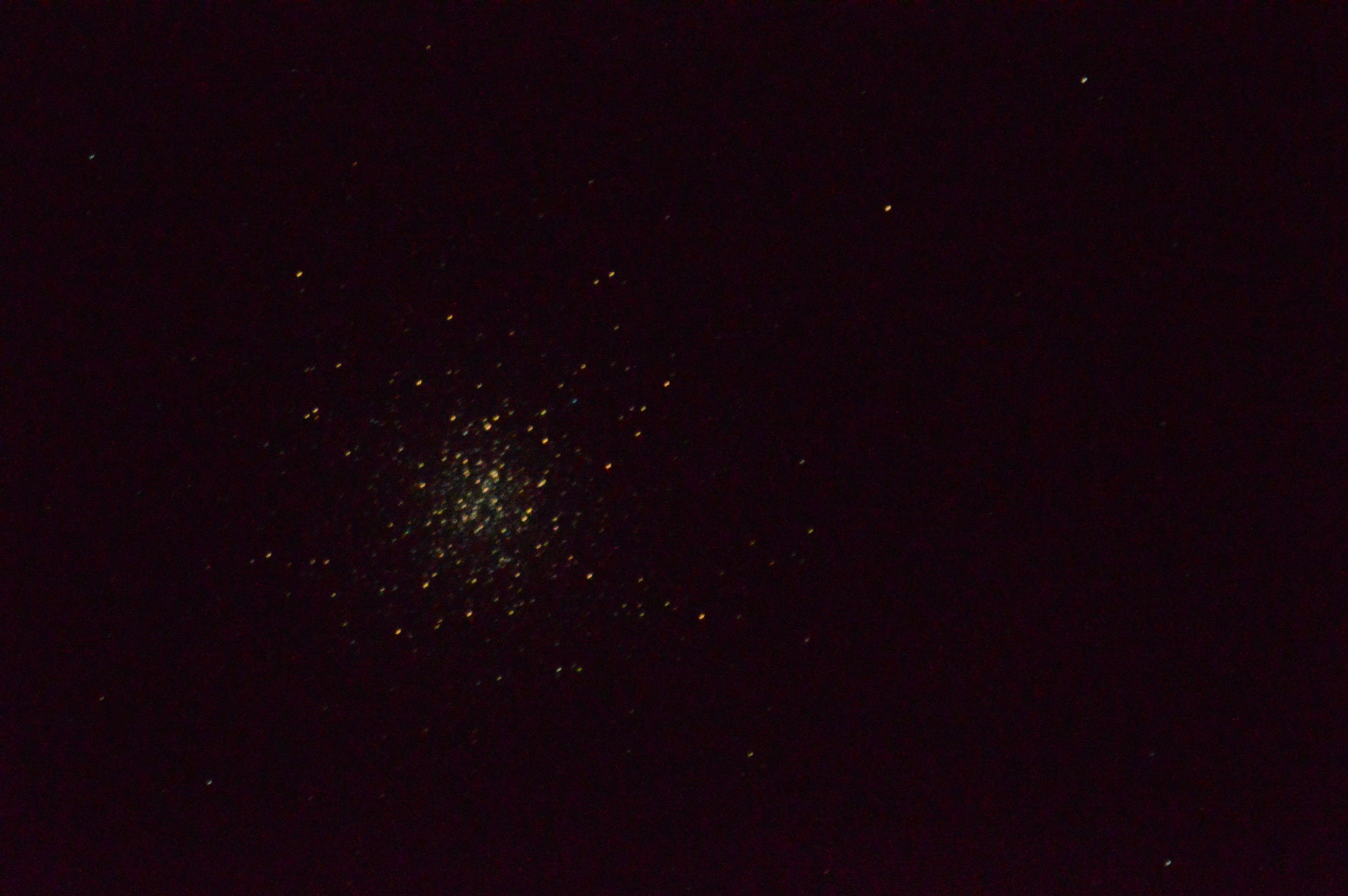 Last night's Star Party was a big success with great attendance. Ed, Tas, Lisa, Robert & I stayed until at least 1:30 a.m., at which point I departed. 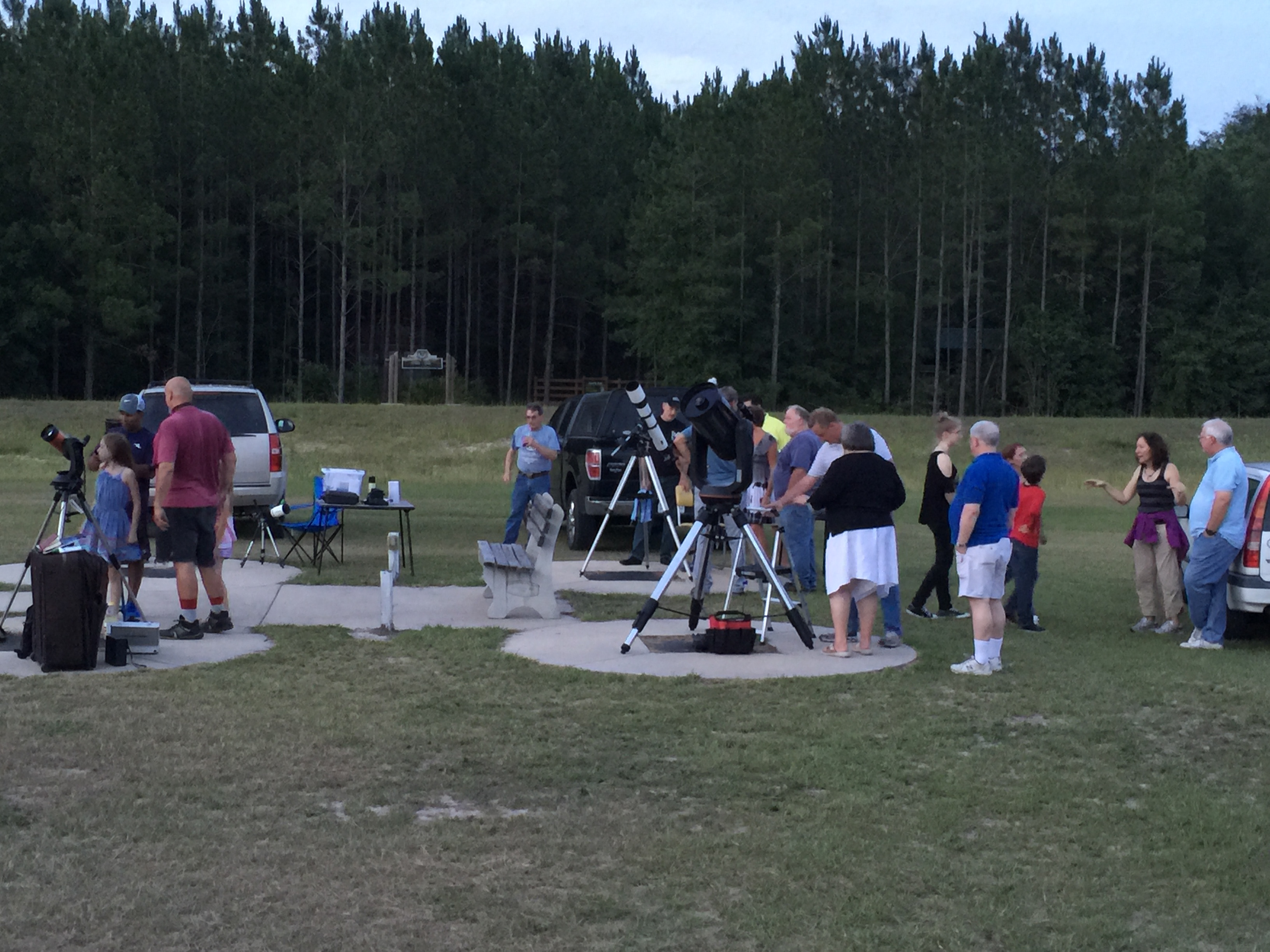 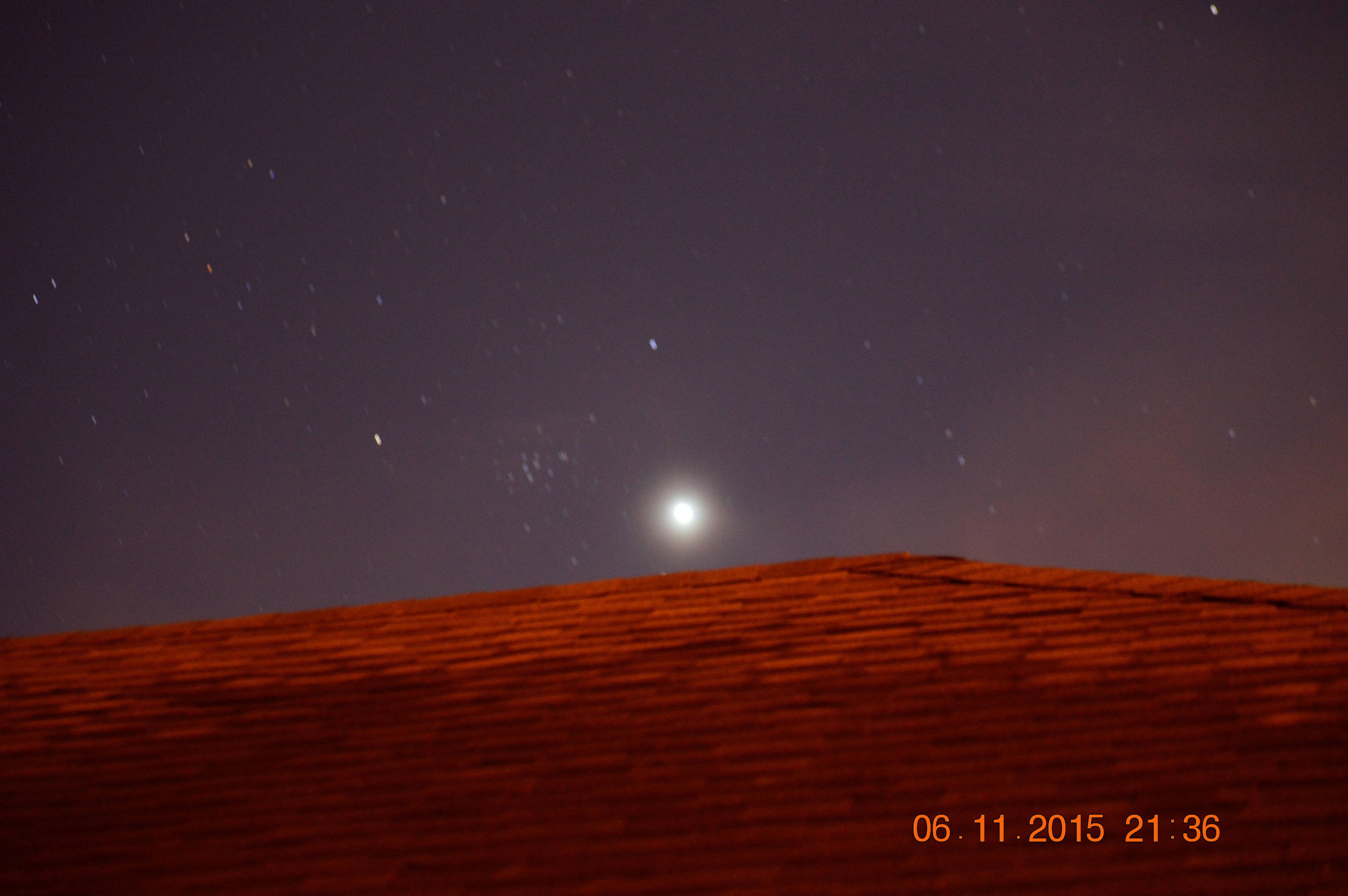 Professor Tanner presenting June 9 before the Alachua Astronomy Club on the topic of LIGO, Advanced LIGO and (suspected) gravitational waves. 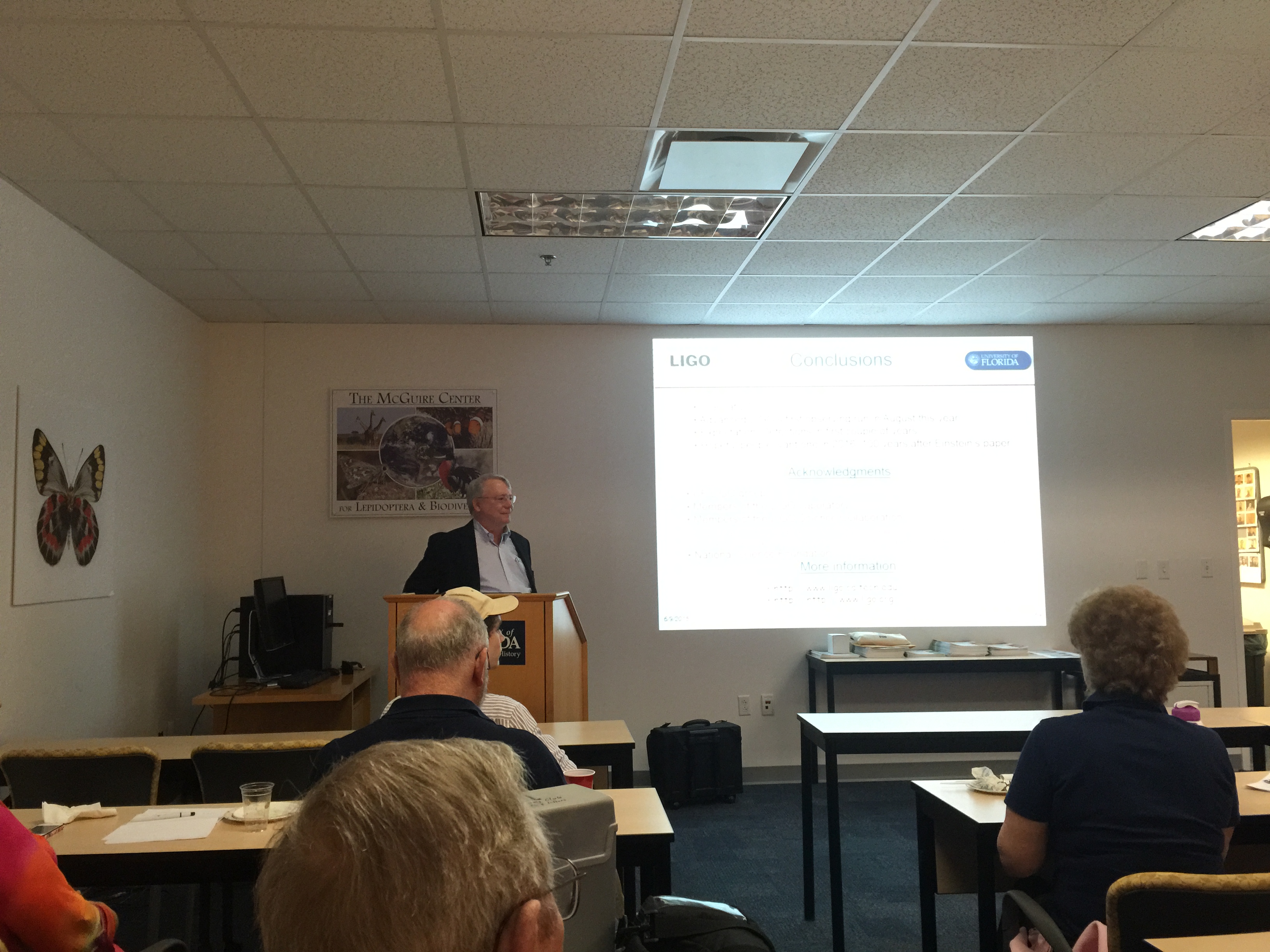 June 8: My scope set-up with my new checklist was easy (tonight was 3rd setup) and I figured out how to do a 2-star alignment that night. Still need to do a polar align. 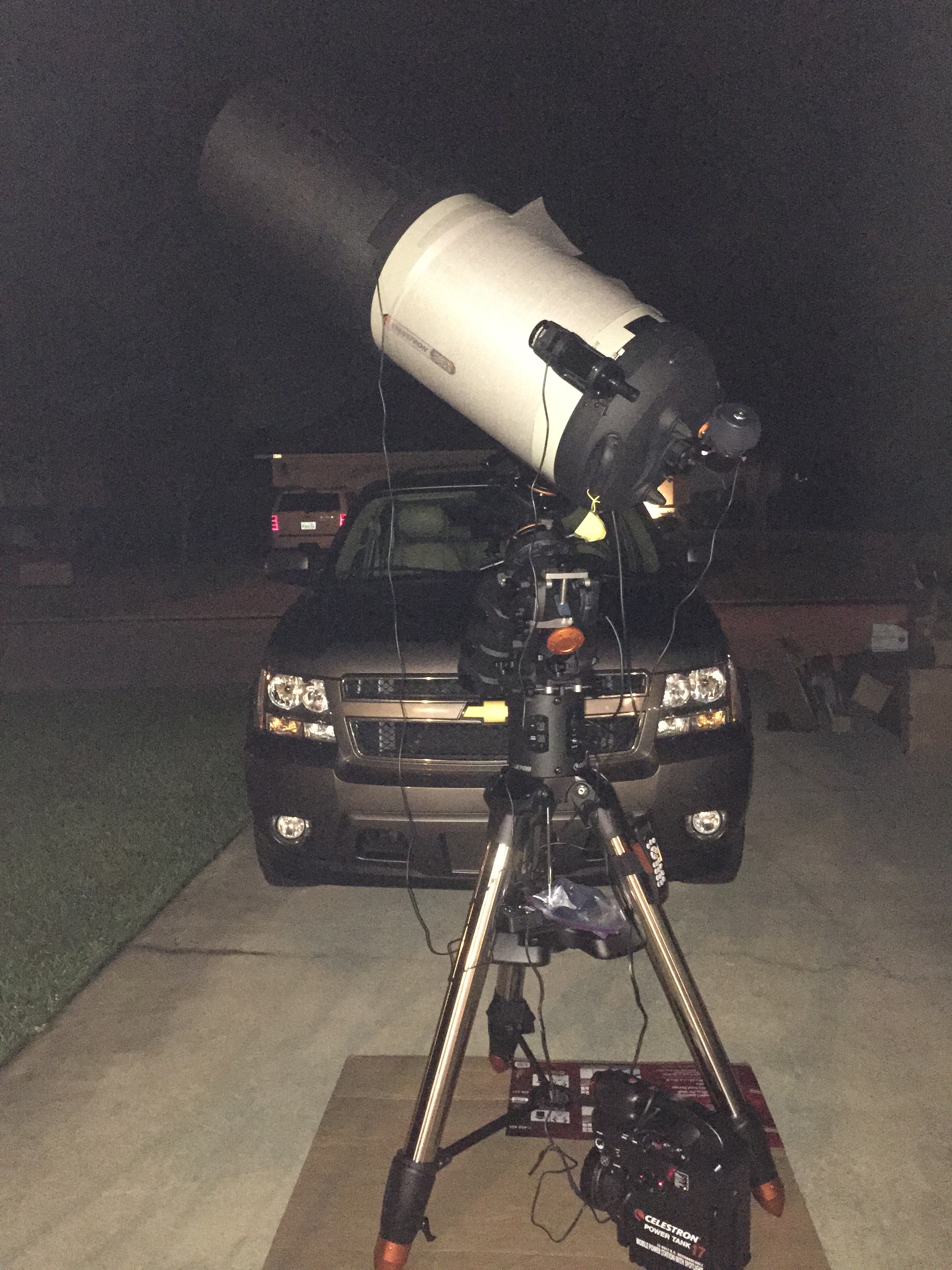 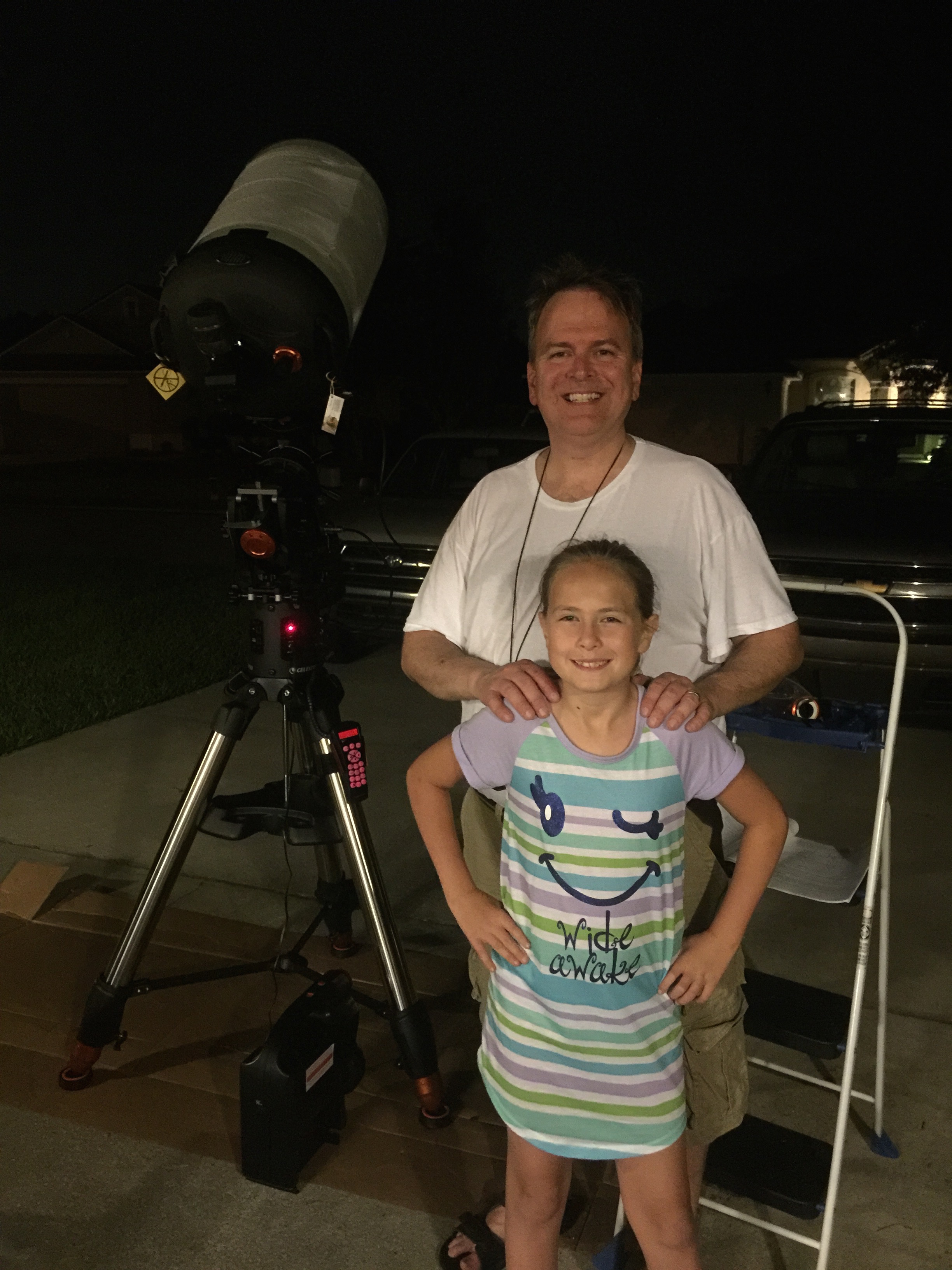 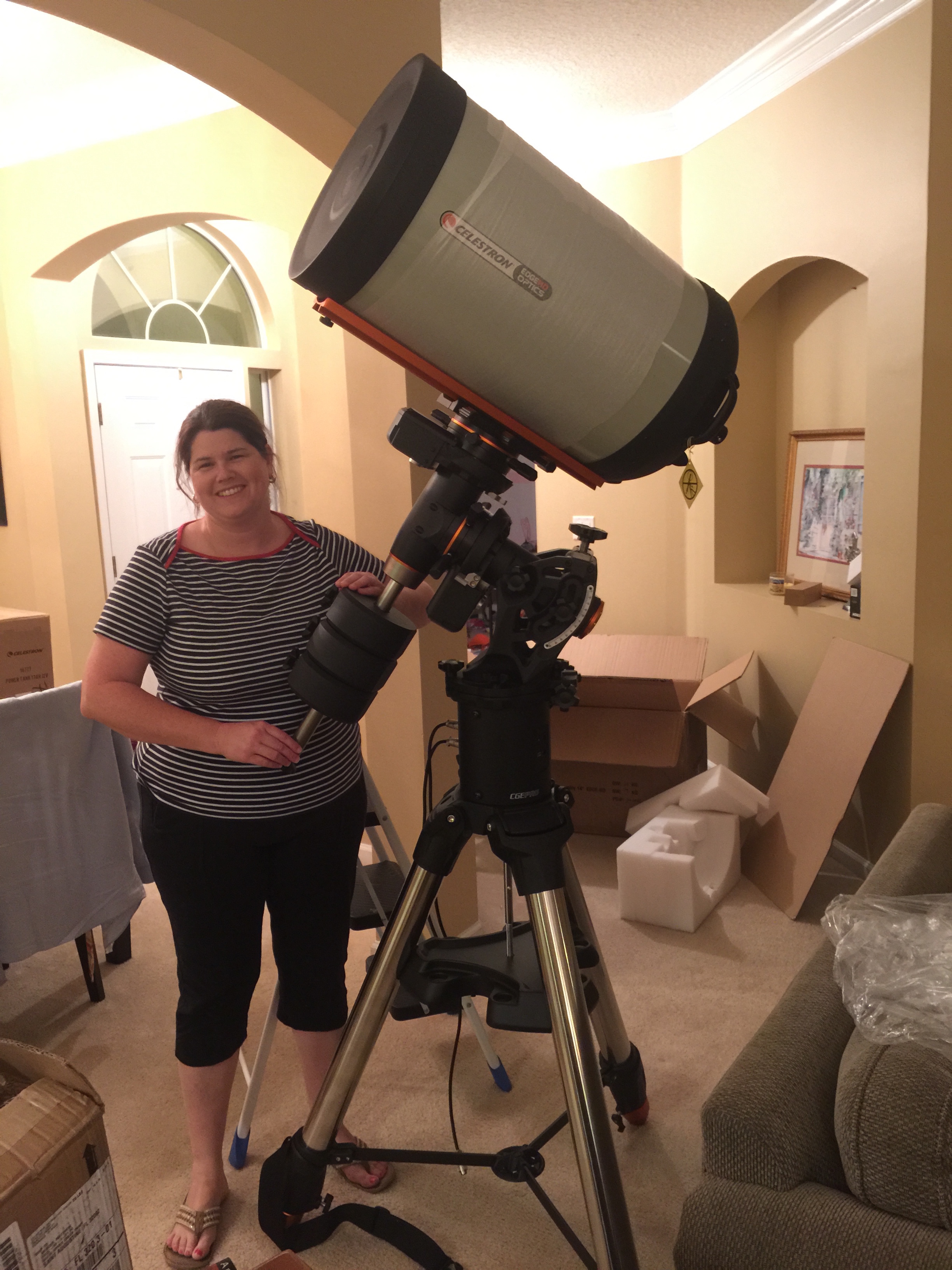 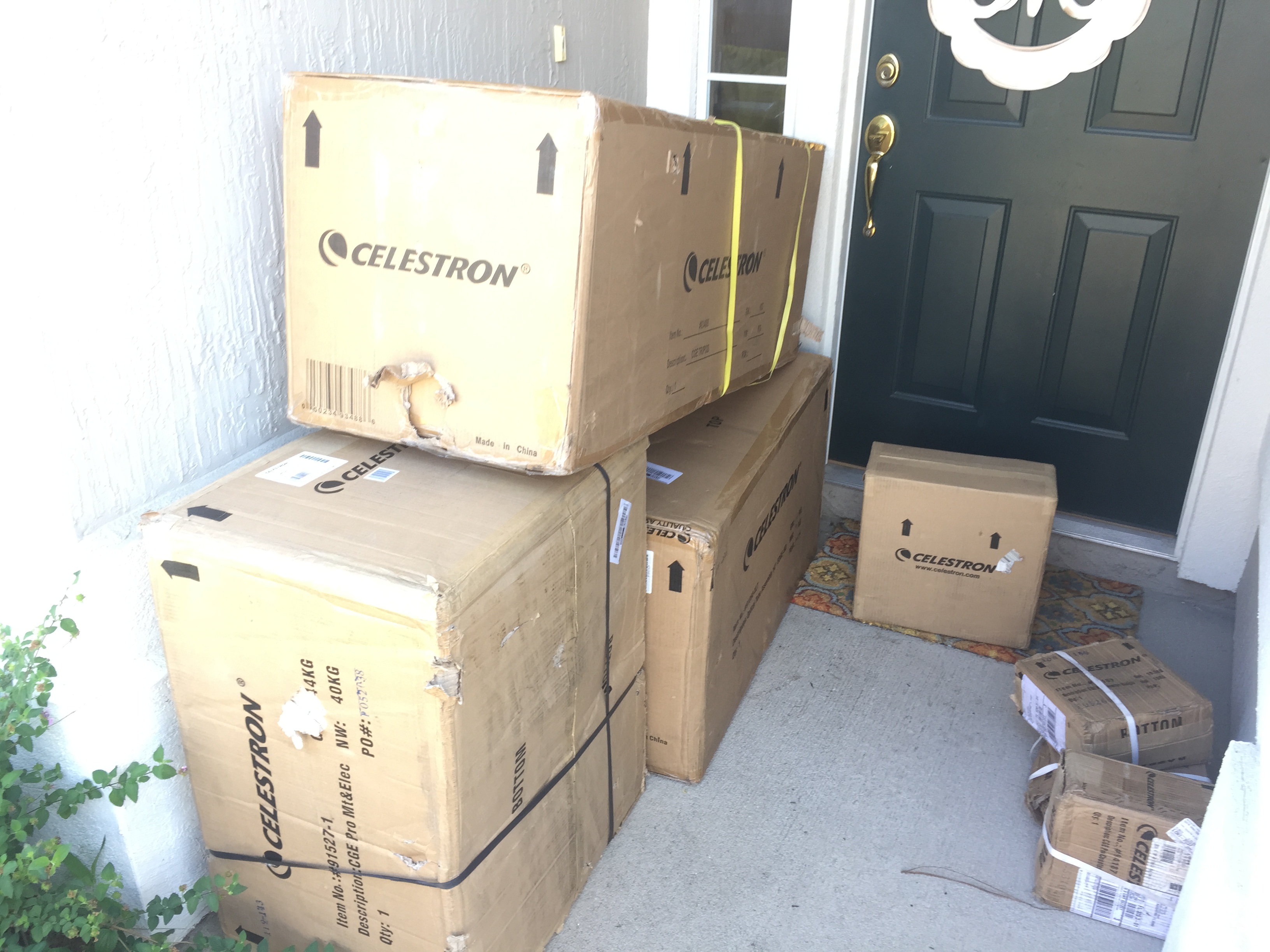 Stoked that my Green Laser pointer pen arrived today. Ordered it May 15th on-line. Only $7 & free shipping from Hong Kong! How do they make any money on that?

Saturday, I totally cleaned out the garage to make room for an "astronomy area" and (after the After Photo) pressure-washed the floor and inside garage door. All-day event, but well worth it.

I ordered a telescope that ships today from Celestron in CA; it should arrive June 4th.

Excited to get a look at (and photo of) Antares, before the clouds rolled in tonight.

Amazing day at Kennedy Space Center in Florida! Highly recommend it. Even better than it use to be.

Scroll to top to see this site's other pages.